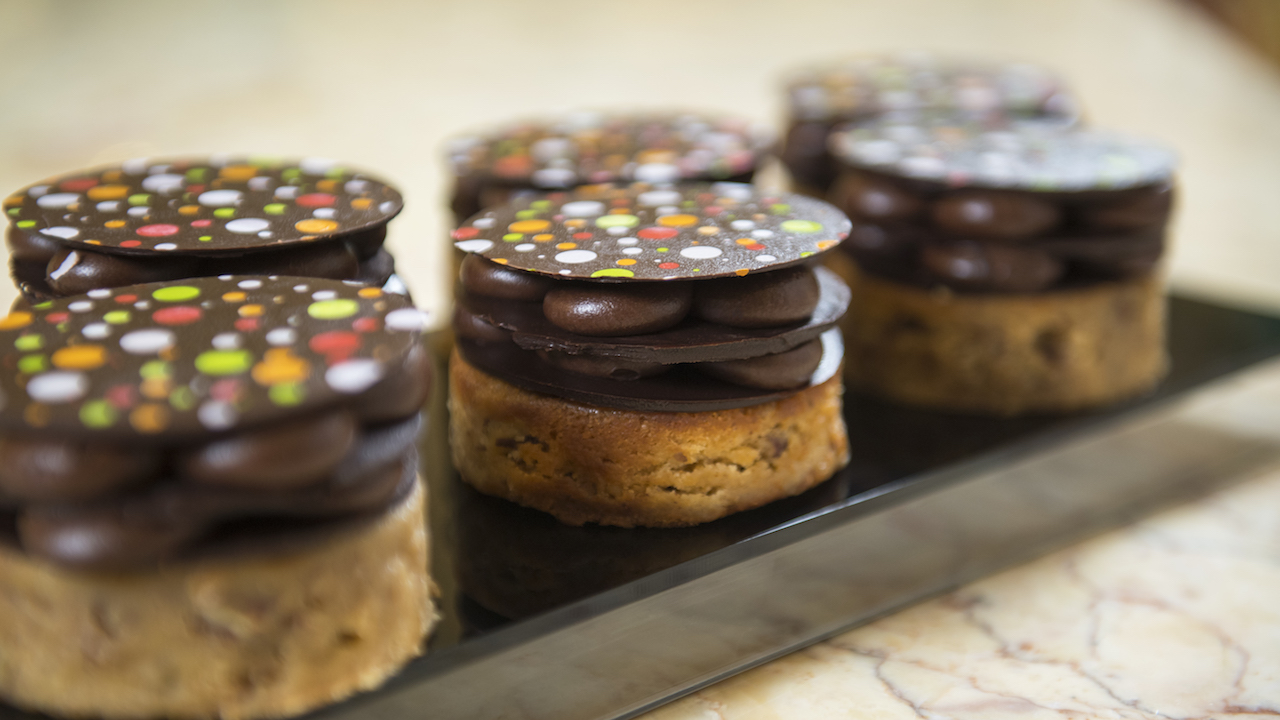 There’s nothing that compares to a day at sea with Disney. The service and entertainment is the best you’ll find afloat. But, let’s be honest. When you think about cruising, there’s one thing that really comes to mind; the food. There’s plenty of it day and night. And much of it comes with the price of the cruise.

However, there are a few places, aboard the ships, that we don’t mind spending a little extra to dine. We love the wonderful meals at Palo and Remy. They’re worth every cent to us.

The other spot we love to hit up is Sweet On You Ice Cream Shop aboard the Disney Fantasy. Their gelato is absolutely magical. However, if you visit, don’t miss the baked goods, as well. Our favorite from that case is the Peanut Butter Blondies. What can I say. It combines three of my favorite things; peanut butter, chocolate and a Disney Cruise. The only problem was we only got them once every couple of years while onboard. So we thought we’d remedy that. So, here’s the recipe for those magnificent little circles of joy.

This part of the dish may seem tricky but it’s actually fairly simple to put together. All you have to do is heat the Heavy Cream in a small sauce pan, while stirring occasionally, until it’s just at the boiling point.

Meanwhile, place the dark chocolate chips in a small to medium sized bowl. Pour the heated cream over the chocolate and stir until it has completely melted and has blended together. Then place the ganache into your refrigerator to cool.

Next, gently melt together the Peanut Butter, White Chocolate and Butter in a double-boiler. Using a spoon, lightly blend them all together.

Meanwhile, whisk the Eggs and Brown Sugar together using an electric mixer. The combination should thicken slightly.

Be a little careful with this next step

The next thing you’ll want to do is temper the egg mixture into the melted ingredients.

You do this by slowly adding the egg mixture while continuously stirring the melted ingredients.

Drizzle a little eggs and stir.

Do this until the eggs and melted ingredients are completely blended.

Next, sift the flour and gradually fold into the egg and melted ingredients mixture. Add the Pecans and mix until all items are blended.

Prepare a 9 inch baking dish with cooking spray or butter and add the batter; spreading evenly.

Bake at 350ºF for approximately 45 minutes or until a toothpick inserted in the center comes out cleanly. Then cool completely on a baking rack.

Okay, here’s where I completely changed this up. Just for a second, scroll back up to the original picture of this dish from Disney.

I can’t do that! I’m guessing, neither can you. So I decided to do something a bit different that most people will be able to do in your own home.

Start by placing 2 cups of Dark Chocolate in a double-boiler. (Yep, it’s back) Heat on the stove, stirring occasionally, until the chocolate is melted.

Meanwhile, place a piece of parchment paper on a sheet pan.

Spoon the melted chocolate into a pastry bag with a fine tip.

Carefully pipe the melted chocolate onto the parchment paper into any shape you would like. As you can see from the above photo, I decided to make them into “Mickeys”. Once you’ve created the desired amount, let the chocolate sit to cool.

Now can just stop there and that would be fine. But I like to add a little bit more to my garnish. So, here’s what I did.

I melted another cup of Peanut Butter Chips in a double-boiler. (It’s getting more use in this recipe than it has in the last 3 years) I then spooned the melted peanut butter into another piping bag (or parchment cone). Once the chocolate garnishes had mostly set, I piped out the peanut butter in a crisscross pattern. You can see the result in the photo below. Once again, cool until the garnishes set completely. (You can place them in the refrigerator to help move the process along)

Again, these are not as pretty as what the pastry chefs aboard the Disney Fantasy are creating. However, I find these to be fairly simple and fun to make. The kids can even take part in creating these.

Putting It All Together

Try to cut the Blondies as closely together as possible so you can waste as little of this wonderful baked good as possible.

Now that you’ve cut the blondies into beautiful, peanut buttery disks, it’s time to top with the Chocolate Ganache. You can do this in a couple of ways.

Spoon the ganache into a piping bag with a medium-sized star tip. (You can also use a round tip but the piped out chocolate can look like…well…let’s just say it looks like a very popular brown emoji) Starting on top of the blondie, pipe a layer of the chocolate gancahe in a circle. Continue around the top until you reach the center and the blonide is completely covered.

You can also just frost the top similar to what you would do with a cake. Just spread an even layer of the ganache across the top using a rubber scraper or, simply a knife. It’s not quite as stylish a way to get it done. However, it is definitely easier.

Once the Chocolate & Peanut Butter garnishes have firmed up, pick your favorites and carefully remove from the sheet pan. Trim any loose ends of chocolate and/or peanut butter from the sides until you get the shape you want. Then, just place on the top of the Peanut Butter Blondies.

There you have it!

These little circles of heaven are absolutely wonderful. The peanut butter comes through but the white chocolate balances the flavor. You also get that hint of brown sugar you expect from a blondie. There’s also a nice occasional texture change that comes from the pecans. We love this dessert. (Michelle loved it so much, she asked me to make it again just a couple of days later…that’s a great sign!)

Now, obviously, my garnishes lack the flair of what you can get while onboard the Disney Fantasy. Let’s just call them “rustic”. However, I do believe it’s something you can create fairly easily at home and, if you choose, include the entire family. But, it is a step you can skip. Feel free to top it with your favorite candy or sprinkles or whatever you want.

For the Chocolate Ganache

For the Peanut Butter Blondies

For the Garnish (optional)

To complete the Peanut Butter Blondies

Be sure to check out some of our other Disney Dishes: