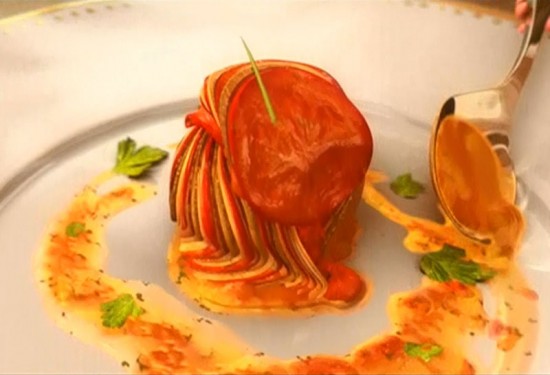 When you think of food in Disney Films, there are a few things that come to mind. The spaghetti from Lady and the Tramp; the Beignets from The Princess and the Frog; and, of course, The Grey Stuff from Beauty and the Beast. (All recipes we will be recreating in the future, by the way) However, the Disney/Pixar film that probably has the best (and most accurate) examples of great food is Ratatouille. I mean, who hasn’t wanted to sample the Ratatouille from Ratatouille? Well, we’re going to show you how you can with our latest Disney Dish

Let’s Get This Out Of The Way

The dish that Remy creates in Ratatouille, technically, isn’t Ratatouille. It’s really a dish that goes by the name of (fancy French term alert!) Confit Byaldi that was perfected by the great chef Thomas Keller.

Ratatouille itself is a much more rustic dish. We’ll have a version of that coming your way in the near future.

This dish, however, uses a lot of the same flavors in a much more elegant, if more difficult to construct, way.

But you’re not here to learn the classic form of Ratatouille. You’re here to find out how to create the dish that made your tummy rumble every time our favorite little rat/chef spooned his sauce around the beautifully sculpted plate of vegetables.

The Piperade (aka The Sauce)

Preheat your oven to 450ºF. Cut the Red Bell Peppers in half and remove the stem, ribs and seeds. Place the halves in a bowl with a 1/2 tablespoon of oil, 1/4 teaspoon of Kosher Salt and an 1/8 teaspoon of freshly ground Black Pepper. Place on a sheet pan with inside of the peppers facing down and roast in the oven for 25 to 30 minutes or until the peppers begin to brown

While the peppers are roasting, fill a medium sized sauce pan with water and bring to a boil. You will also want to fill a large bowl with ice water. Take all of the tomatoes you will be using for this dish (3 for the sauce & 4 for the vegetable layers) and make an “x” on each end with a knife. (Like in the picture below)

Place the prepped tomatoes in the boiling water and blanch for about 45 seconds. Once you see the skin start to separate or larger cracks appear in the skin, quickly remove the tomatoes and place in the ice water bath to stop the cooking. You should then be able to easily peel the skin away. Use a paring knife if you find you’re having any struggles.

On to the Piperade

Once the peppers have completed roasting, remove them from the oven and place them immediately in a medium sized bowl and tightly cover with plastic wrap. Let sit for at least 20 mins. Then uncover and peel off the skins. The post-roasting steaming should make them fairly easy to remove.

Slice the onion, garlic and roasted red pepper (don’t worry about being too fine on this because it will, eventually, all be going into a blender, anyway). Then remove the thyme and rosemary leaves from their stems.

These Veggies Are My “Jam”

Place a medium to large pan on the stove over medium-high heat and add the oil. Sweat the onions until they begin to become translucent. Then, add the garlic and sweat for about 30 seconds. Next, add the roasted red peppers, the 3 tomatoes not in the freezer, thyme, rosemary and the bay leaf. Reduce the heat to medium and cook, stirring occasionally, until the vegetables are thoroughly cooked and seem almost “jammy”. Like in the photo below.

Remove the bay leaf and place the “jammy” vegetables in a blender. Puree until smooth adding a little water if the mixture seems too thick.

Season to taste with kosher salt and freshly ground black pepper. Then, pour into a bowl and reserve. You have your sauce!

This is where the detail work for this dish starts to take place. The slicing and placement of these vegetables is what makes this dish both elegant and complex. It’s what sets it apart from your traditional Ratatouille.

First, place the Japanese eggplant in the freezer for about 10 – 15 minutes. (I know! I know! I’m getting to it). With a very sharp knife, or a mandolin, very carefully slice the Zucchini and Summer Squash into 1/8″ shingles.

Remove the Tomatoes and Japanese Eggplant from the freezer. Slice them into 1/8″ shingles with a knife. (If you have a really good mandolin you may be able to use it to slice the eggplant, as well. Again, please be very careful)

If you’ve made dressings before, this is pretty straight forward. Place the Balsamic Vinegar and minced Garlic in a bowl. Slowly add the oil while continuously whisking until the mixture thickens. Season with Kosher Salt and freshly ground Black Pepper to taste. (I will usually add a touch of honey or brown sugar, as well, to balance the acidity)

Select your favorite baking our casserole dish (I used a 9″ glass pie pan) and prepare with a coat of cooking spray or vegetable oil. Then spread a light and even layer of the Piperade across the bottom. This will add to the flavor of the dish and help keep the vegetables from burning on the bottom.

Once you have all the layers complete, drizzle the top of the dish with a little of the Balsamic Vinaigrette and sprinkle with a bit of the minced fresh herbs. Cut a piece of parchment paper to fit the top of your dish and place directly on top of the vegetables. (You can also cover with aluminum foil but do it loosely to allow a little bit of the steam escape)

Place the pan in the oven and roast at 325ºF for 90 minutes or until the vegetables are cooked through and soft.

Now it’s time for the ultimate part of the dish; the elegant plating. You can easily just serve this dish using a spatula or spoon and place it on a dish or bowl and drizzle with the remaining Piperade and Vinaigrette. There’s nothing wrong with that and it will still be delicious.

But is that what Remy would do?

We both know the answer to that. He’d do it just like he did it in the movie; perfectly! (Okay, we won’t do it perfectly but we can try to make it close) Here’s how to do that.

Place a ring mold (round cookie cutter) in the center of the plate. Using a small spatula or spoon, gently scoop the vegetables from the baking dish and place in a similar way in the ring. The veggies on the base should, essentially, be standing up vertically. Once you fill the base of the ring, lay another layer on the top, horizontally. Carefully remove the ring. If you packed the ring with enough of the vegetables, it should, mostly, keep its shape.

Gently heat the remaining Piperade and drizzle a little of the sauce and the Balsamic Vinaigrette around the vegetable stack. Garnish with some minced Parsley and a single Chive on top.

This dish isn’t as hearty as your typical Ratatouille but it’s not meant to be. It, definitely, doesn’t lack the classic taste you’d expect. The roasted vegetables are delicate yet flavorful at the same time. The Piperade adds a really rich and creamy element that supports the body of the dish. Finally, the Balsamic Vinaigrette adds a nice sweetness and, much needed, acidity that really balances the plate.

So, would I make this Disney Dish regularly?

Probably not, regularly,  in this exact form. It’s just a little too time consuming to create on a day-to-day basis. However, I would use all the elements of this dish to create something in a simpler manner. All the flavors blend so perfectly. It’s worth adding it to your regular side or even main dishes.

However, if you’ve always wanted to create this dish since the first time you saw Ratatouille, I suggest you give it a try. The final result is a delicious and elegant dish that will wow your family and friends.

If you have any questions about recreating this or any of our dishes, please comment below or email me here.

If you like this Disney Dish, be sure to check out some of our other recipes: