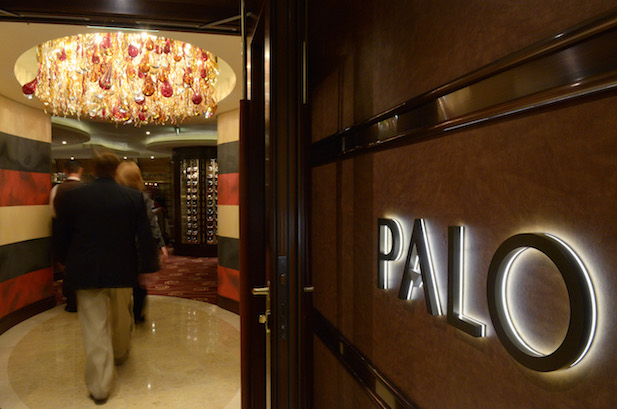 Tomorrow is Valentine’s Day! The holiday made for romance. Couples around the world are scrambling today to get their certain, special someone that perfect gift that will make them swoon.

Many are also looking to take their Valentine out to a wonderful dinner. Well, instead of going to a crowded restaurant that has jacked up the prices to take advantage of poor, unsuspecting couples. Why not serve a wonderful dinner to your loved one, at home? You can make it special with just the right recipe and I’m here to help. Yep, today, I’m going to pass along a Disney Dish that is guaranteed to make your loved one weak in the knees; he Chocolate Soufflé from Palo.

If you’ve ever sailed with Disney Cruise Line, and been lucky enough to dine at this specialty restaurant, you know what a wonderful place it is. You also, probably, had the chance to sample this signature dessert. If so, you will never forget it. Neither will your Valentine when you present it to them.

Now, I’m not going to lie to you. Soufflés are tricky. They take some finesse and near perfect timing when you’re planning it around a meal. However, nothing about this recipe is all that difficult and the results are worth the effort. So, take the risk and make your loved one’s night!

Most of the ingredients for our Chocolate Soufflé from Palo are fairly common. You’ll have most of them in your pantry or refrigerator before we even get started. The rest will be easily found within your grocery store.

As you might expect, the key components for this dish is the Chocolate. Because of that fact, I would suggest not scrimping on the quality you purchase. Spend just a little more to get a Dutch-Processed Cocoa or a higher quality Baking Chocolate. The end product will be that much better for it.

You may, also, notice that their is a separate part of this recipe that revolves around a Vanilla Sauce. We’ll talk, in just a moment, about whether or not you need to make this part of the recipe. (Spoiler Alert: You do!) What I do want to mention, though, is that the recipe calls for a Vanilla Bean. I do suggest you use one of these, if possible, when making this dish. If you can’t find it in your store, or if you’d prefer to save a little extra money, you can replace it with Pure Vanilla Extract. One teaspoon of it can be substituted in place of the ¼ Vanilla Bean.

Okay, I just mentioned that a part of this recipe is the Vanilla Sauce. Now, you might question as to whether you need this sauce as part of a dish focused on Chocolate. I totally get that! However, if you’ve ever had this dish at Palo, you know the sauce adds a nice contrast to the richness of the Soufflé.

Another reason to make it is…well…it’s just delicious. It’s a perfect addition to a couple other recipes which we will be exploring later on here at Disney Dishes.

It’s completely up to you but I suggest you make it! If not, go ahead and skip ahead in this recipe.

So you’ve decided to make the Vanilla Sauce!

Great! We’ll start with this part of the recipe because you can make it ahead of time. This is particularly important because of the timing required in making the Soufflé.

Start by splitting the ¼ Vanilla Bean and add it to the Heavy Cream in a small pot over medium heat. Continue to heat, stirring frequently, until it just begins to boil.

While the Heavy Cream is heating, add the Egg Yolks and Sugar to a small bowl and whisk to thoroughly combine.

Once the Cream mixture just begins to boil, remove from the heat and take out the Vanilla Bean. Add a little of the Cream to the Egg Yolks while continuously whisking. Gradually add a little more at a time, while whisking, until all the Cream is combined with the yolks.

Return the Egg & Cream mixture to a small pot over low heat. Slowly heat the mixture, while stirring continuously, until the sauce reaches your desired consistency. Essentially, you want it to coat the back of a spoon similarly to the above picture.

On to the primary part of our dish; the amazing Chocolate Soufflé from Palo.

Start by preparing 6 Soufflé Cups or Ramekins by coating the inside with Butter and a light dusting of sugar. The result should look similar to the picture below. 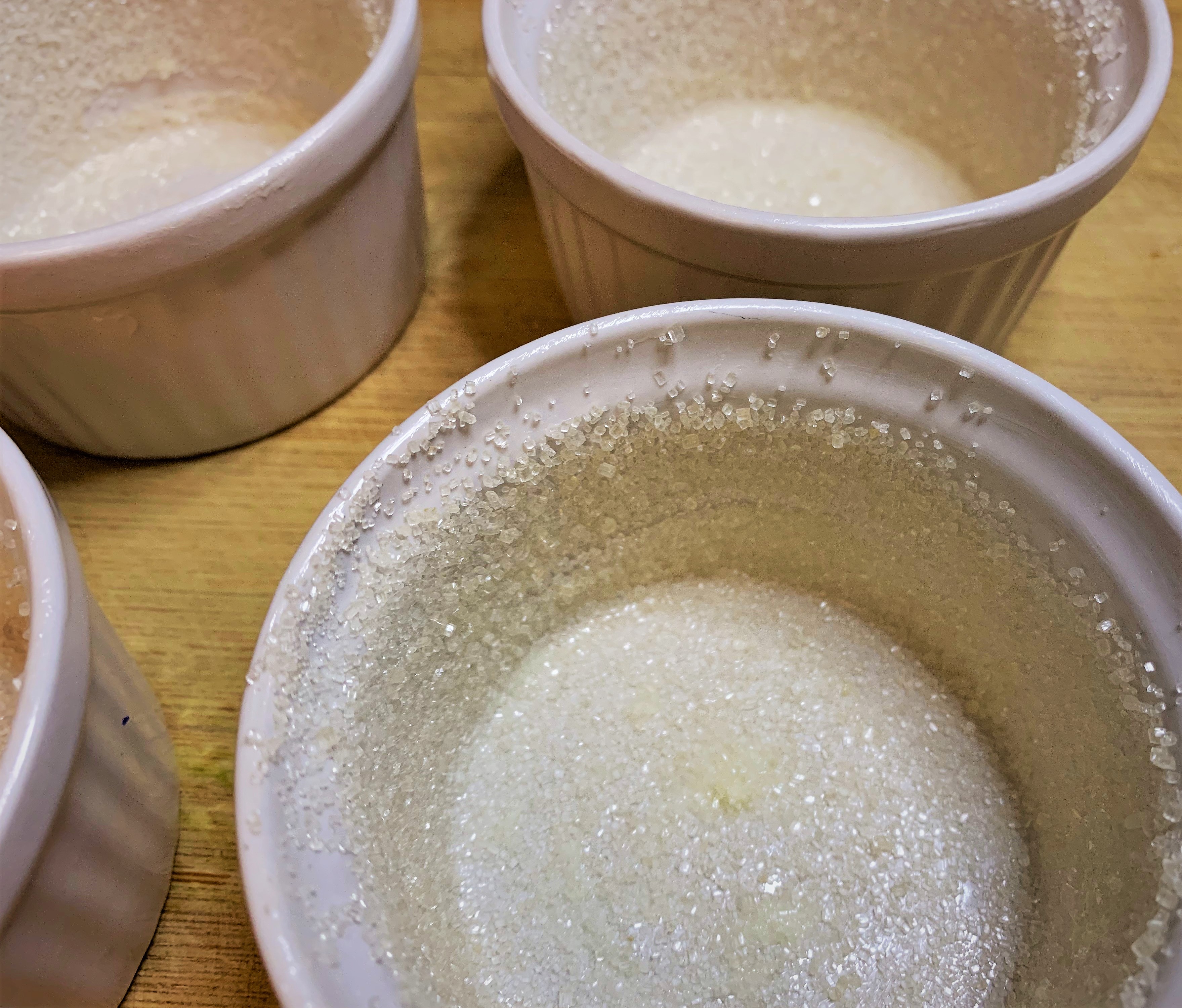 Next, place the Baking Chocolate or Semi-Sweet Chocolate Chips in the top portion of a double boiler over medium heat. Heat, stirring occasionally, until the Chocolate is completely melted.

Now, add the Milk to a second small pot over medium heat. Stirring frequently, bring it just to a boil.

While the Chocolate is melting and the Milk is heating, add the Butter to yet another small pot and melt it. Add the Cocoa Powder and Flour to the melted Butter and stir to combine. Continue to cook the mixture for about another minute.

Once the Milk has just begun to boil, add it to the Chocolate, Flour and Butter mixture and stir until thoroughly combined and smooth. Next, blend in the melted Chocolate and remove the pot from the heat. Allow the Chocolate mixture to cool for about 5 minutes.

Now, add the Egg Yolks to the Chocolate Mixture and stir to combine.

This is the key!

Now we get to the part that will make the difference as to whether your Chocolate Soufflé will end up like the one you enjoyed that one special night at Palo.

This is what gives the soufflé it’s tight and fluffy body.

Add the Egg Whites to an electric mixer with a whisk attachment. Whisk on high speed, gradually adding the Sugar a tablespoon at a time. Continue until the Egg Whites are whipped to a stiff peak, similar to what you see in the picture above.

Slowly fold the Whipped Egg Whites into the Chocolate Mixture a spoonful at a time, being careful not to “deflate” the eggs. Continue until all the Whites have been combined into batter.

Everybody into the oven

Okay, you’ve done the hard work. Time for the payoff!

Preheat your oven to 350ºF. While the oven is heating, add a couple of cups of water to a small pan and bring it to a boil.

Next, carefully spoon the batter into each of the prepared Soufflé Cups or Ramekins until each are filled nearly to the top. Place the cups into a baking dish. Add enough of the Boiling Water to the baking dish to reach about halfway up the outside of the Soufflé Cups.

Now, carefully place the baking dish in the preheated oven and bake for 20 minutes at 350ºF.

Once your Chocolate Soufflé from Palo is done baking, you’ll want to serve it immediately. Carefully remove them from the baking dishes, sprinkle with a little Powdered Sugar (if desired) and place on a separate plate. Serve with the Vanilla Sauce. I would also suggest a scoop of Vanilla Ice Cream on the side.

This recipe for the Chocolate Soufflé from Palo is a delicate one. However, the result is so worth it! The Soufflé is tremendously rich and filled with this amazing deep chocolate “loveliness”. It’s light, fluffy and saucy all at the same time with just a little bit of a crispy crust on the edges that provides a terrific texture contrast.

If you decide to add the Vanilla Sauce, it will bring a spectacular luxuriousness as well as a nice flavor profile change from the dark and luscious chocolate.

Finally, I really suggest having a scoop of Vanilla Ice Cream on the side, as well. It acts, almost, as a nice pallet cleanser that adds a wonderful bright contrast to the richness of the dish.

Bottom Line: You want to wow that special someone in your life this Valentine’s Day? Then make this Disney Dish! You won’t regret it!

For the Vanilla Sauce

For the Chocolate Soufflé

For the Vanilla Sauce

For the Chocolate Soufflé