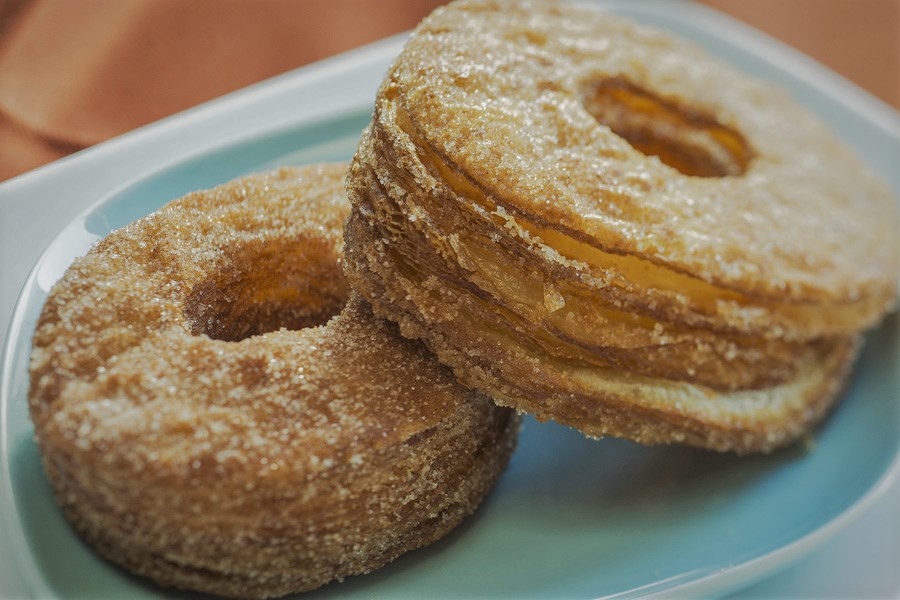 Our latest Disney Dish was, originally, made famous in New York. People would line up around the block for a chance to sample this amazing combination of two pastry classics. Of course I’m talking about the Croissant Doughnut.

Eventually, the flaky, delicacy found its way out of The Big Apple to other pastry shops across the country. That included the Disney Parks. Yes, you can find this dish right in the middle of the Walt Disney World Resort in Epcot.

However, the location to order it has changed a couple of times. For quite a while, it could be found in World Showcase at the Refreshment Port just before you reached the Canada Pavilion. It has since moved. As of writing this, you can currently find it in the Electric Umbrella. That is likely to change fairly soon, as well. However I expect it won’t take it long to re-emerge in another location.

It’s just too popular to go away.

Soon, though, you won’t have to worry about the Croissant Doughnut’s fate in the Disney Parks. That’s because I’m going to show you how to make it right in you own kitchen. The best thing about this recipe is its easier than you might expect. Time consuming, yes; but not a difficult dish to pull off.

Enough talking! Let’s get our French on!

As complex as this dish may seem, the ingredients are all, fairly, simple. I’d be willing to bet that you have, nearly, all of them in your refrigerator and pantry right now. However, the most important item is the butter. It’s what creates the wonderful layers and richness you expect in your Croissant Doughnuts.

Once again we are creating a yeast dough. Although this one won’t act, exactly, like it did with the dough for our Cheeseburger Pods or Mickey Pretzels. This dough will not be a rising dough. (At least not initially, that is) However, since it does use yeast as a key ingredient, you will still want to activate it. So, start by warming the Milk. Then mix in the Active Dry Yeast and let sit for about 5 minutes. When bubbles start to form at the top, you’re yeast is awake and ready to go.

Next, place the Milk & Yeast mixture to the bowl of an electric mixer. Add the Eggs, Sugar and Vanilla Extract and combine.

Now it’s time to start adding the All-Purpose Flour and Salt. Begin with just the first cup and combine using the dough hook attachment. Gradually add the other 2 1/4 cups of flour a little at a time until the dough comes together. Once the flour has been full incorporated, continue to knead the dough in the bowl for approximately 5 minutes. The dough should be mostly smooth while slightly tacky and fairly elastic.

Now it’s time to start the work that will lead to all those wonderfully, flaky layers you expect from Croissant Doughnuts. Using your preferred roller, press out the dough to a “rectangular” shape that is about 1/4″ thick; like in the picture above. Take each end and fold over the middle like in the below photo. Cover in plastic wrap, place on a baking sheet and refrigerate for at least 30 minutes to let the dough rest.

While your dough is resting, it’s time to get the most important ingredient in this dish ready to go; the butter! Place the Butter and remaining 1/4 cup of All-Purpose Flour in the bowl of your electric mixer. (Oh yeah. I should’ve told you you’d need to clean it after making your dough. Sorry!) Whip the butter and flour together, occasionally scraping down the sides of the bowl, until the mixture is light and fluffy.

Once the dough has rested in the refrigerator for at least 30 minutes, it’s time for the next step. Remove the dough and place it on a lightly floured surface. Once again roll the dough into a rectangular shape that is about 1/4″ thick. Spread all of the butter evenly across the surface of the dough like in the picture above. Starting from left to right, fold the dough over the center once again like you did before the initial resting period. Cover again in plastic wrap, place on a baking ban and refrigerate for at least 30 minutes. (Are you sensing a theme here?)

The next several steps will be relatively simple but very repetitious. Remove the dough from the refrigerator, place on a lightly floured surface and roll out to a rectangular shape about 1/4″ thick. At this stage, some of the butter will “squirt” out from the dough. Collect as much of the escaping butter as you can and spread it on the top of the dough.

Now it’s time to fold once again. Starting with the left side, fold toward the center then follow by folding over the right side. The folds should go the opposite direction from which you made your last folds. This is what’s called the “turn”. Essentially, you’re “turning” the dough 90º each time you do this and (spoiler alert) you’ll be doing it a few more times.

What a cut up!

Once you’re done making your dough “turns”, it’s time to get your Croissant Doughnuts cooking. Roll out the dough into a rectangle one more time. (It’s the last time, I promise) This time, however, you want it to be a little thicker. It should be somewhere around 1/2″ thick.

Now it’s time to cut the dough into whatever shapes you prefer. I’m going with a standard doughnut shape using a 3 1/2″ and a 1 1/2″ cookie cutter. However, there are no rules here. Make them bigger! Cut them smaller! Make them square! Shape them into Mickeys! Do what you want!

If you’ve decided to follow along with me, place the larger cookie cutter as close to the dough’s edge, as possible. Then, place the smaller cookie cutter in the center and press down. Continue cutting the doughnuts, as close as possible to each other, until you no longer have space. Remove the cut doughnuts and their holes. You can then combine the remaining dough and roll it out again. (Okay, I lied. Sorry) Then cut out more shapes just like the first batch.

Let’s get these babies cooking!

Carefully place the cut doughnuts into the oil a couple at a time, being sure not to overcrowd the pot. Fry on one side for about a minute then flip and cook on the other side for about another additional minute. The doughnuts should be golden brown when fully cooked.

Carefully remove the cooked Croissant Doughnuts from the oil and place on a baking sheet lined with paper towels. You’ll see that they have risen greatly and have several beautiful layers showing on their sides.

Meanwhile, combine the Cinnamon and Sugar in a medium-sized bowl. Once the doughnuts are cool enough to handle, add them to the bowl and toss them with the cinnamon/sugar mixture until well coated.

There’s nothing that needs to be said about this Disney Dish other than than it is absolutely amazing! Our Croissant Doughnuts are crispy on the outside but light and airy on the inside. The layers of butter add the “fluffiness” you expect from something with “croissant” in the name. Meanwhile the cinnamon and sugar add a sweetness and spiciness that perfectly balances the pastry’s richness.

You won’t be able to stop with eating just one of this Disney Dish. So be sure to make plenty!